A uniformed, self-driven, fresh and colourful onboarding, based on energy transmission.

To guarantee a standardized onboarding for each new employee, which gives them a complete understanding of the company in a short period of time.

The RACC was aware of their improvement opportunities related with their onboarding process. Therefore, they wanted to:

Digital content connected with an essential concept for the company: the flow of yellow energy, the one that boosts the RACC to the future.

After some conversations with the client about their “company rituals” and internal culture, the “yellow energy” concept came up. It was a concept used in informal conversations between some managers and their teams, and also among colleagues, but they never communicated it in any corporate way. We found it interesting and since it’s a concept already known by the rest of the employees, we considered its development to be powerful.

Feel the yellow energy became the main campaign concept, and it leads the graphic line of the materials, focusing on their corporate colour –yellow- as a key driver of the experience. 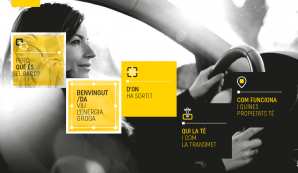 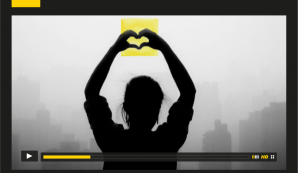 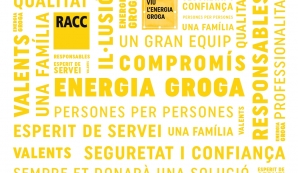 We developed a digital experience which was later embedded in their Learning Management System, using the SCORM format. Therefore, new employees could have access some days before their incorporation and could learn about the company through the following elements:

5 videos which introduce each of the chapters using storytelling techniques and connecting with the audience from an emotional point of view, connecting the messages with the yellow energy. Following that idea, for example, instead of explaining the history in a regular, objective way, we talked about who discovered the yellow energy and how they found it; in the offers chapter we explained in which ways it can transform itself, or which are its main attributes –as a metaphor of the company values.

5 infographics that explain the topic in deep, in a visual way. Easy to read, fresh and beautiful, and of course following the same colourful aesthetics.

A final quick test with curiosities which unlocks the following chapter and increases the experience progress.

Once the online training was complete, users received their diploma. They became officially part of a next generation full of an intense yellow energy!

It became a short and entertaining experience, since users could know basic aspects from the company –an insurance club-, and understand their main mission through the Yellow Energy concept: help, prevent and assist all motorists.

Creators of experiences that motivate and involve people and move them to action.